A Further Exploration of Home Field Advantage in the NFL

An Initial Exploration of Home Field Advantage, showed that league wide home field advantage (HFA) decreased steadily over the last 20 seasons and that few, if any, teams possess predictably better HFA than others. The analysis did find that HFA is lower in divisional games, but otherwise kept things high level. The analysis in this post digs deeper into the nuances of HFA by exploring the impacts of three additional factors--field surface, time of day, and bye weeks. These factors are then combined to create a new model for predicting HFA in NFL games, finding the following results:

The physical differences between artificial and natural surfaces directly impact how players move on the field. While natural turf shears under high force, artificial turf does not, allowing players to create significantly more torque, which in turn results in faster lateral movement, and, consequently, more lower limb injuries. The effect of artificial turf on the game is so well established that the NFLPA issued a recommendation to remove it entirely from NFL stadiums. 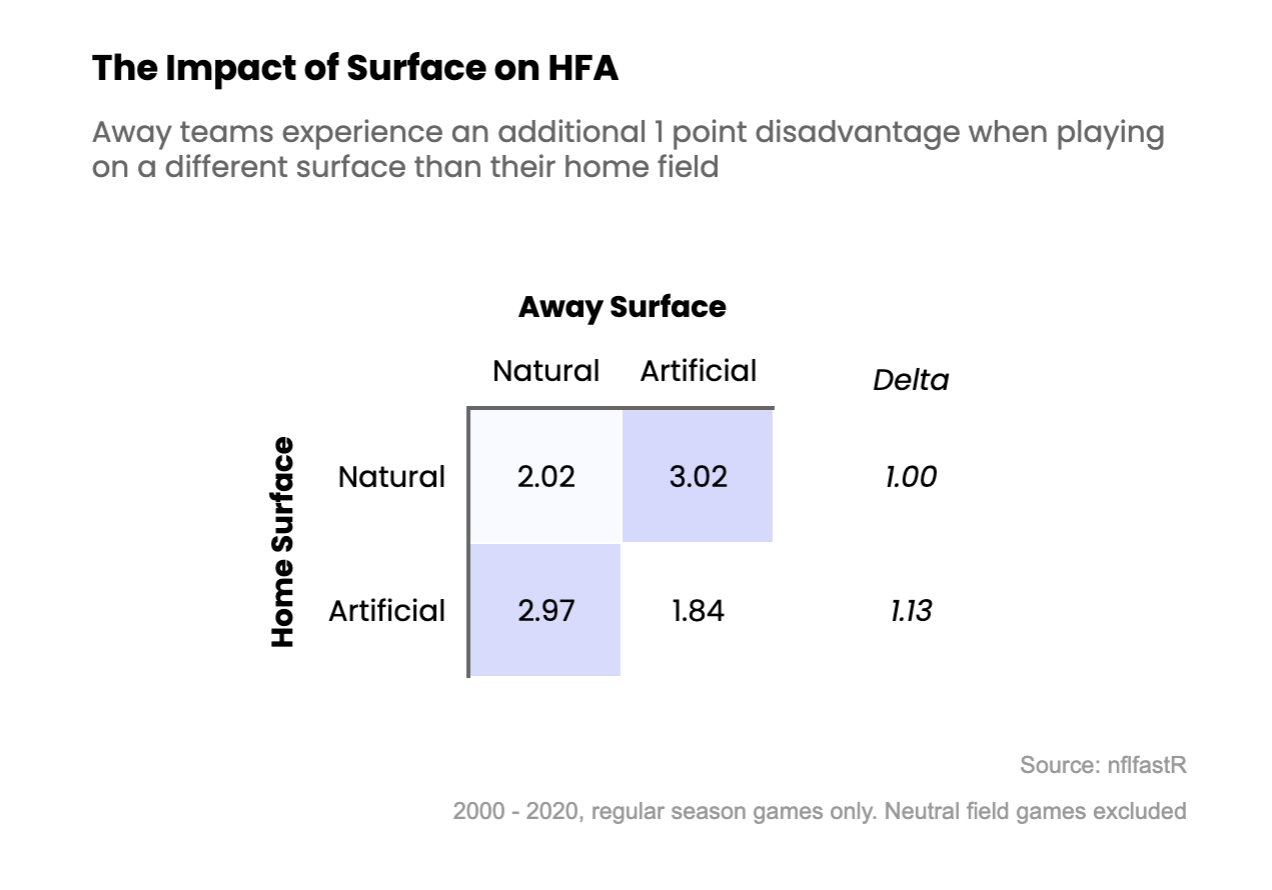 Despite changes in HFA over time, the surface dynamic has remained fairly consistent, only inverting briefly in 2010 and again in the pandemic season of 2020: 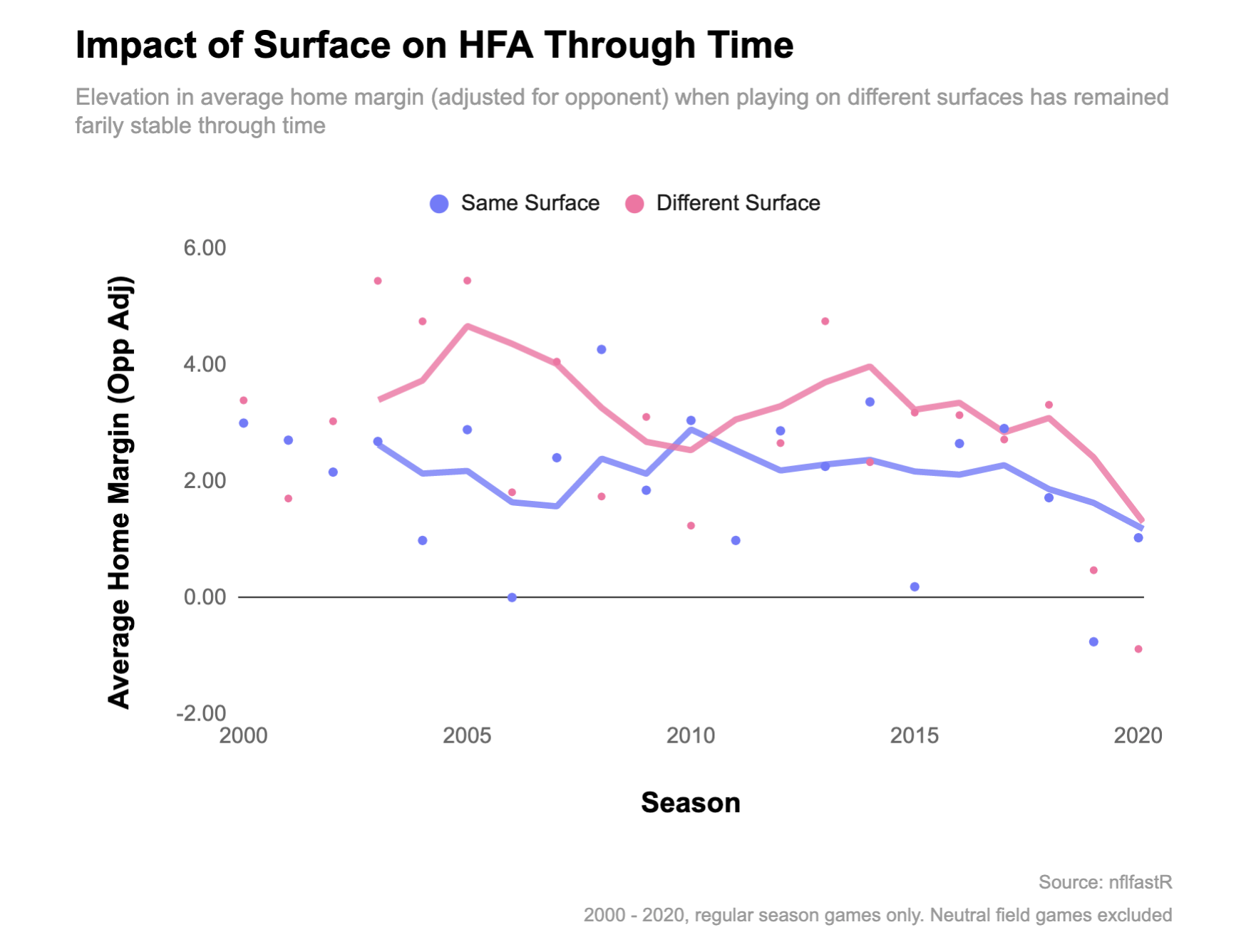 A 1 point swing in average home margin caused by surface differences is fairly significant when considering the fact that HFA has been worth roughly 2.5 points over the same period. A model that wishes to accurately capture the effects of HFA, must consider the role surface plays in creating additional advantage for the home team.

Home teams coming off of a bye win by 0.50 more points, on average, than those that played a game in the previous week. This advantage is driven by the added rest and preparation time byes provide to teams, as evidenced by the fact that bye week advantage scales with additional days of rest and is heightened for older teams and teams that are less familiar with their opponent (Foreman, 2013).

In this sense, the value of a bye week is not strictly independent from the value of HFA. The mechanisms that are at least partially responsible for HFA--rest, preparation, and acclimation--are the same mechanisms that make bye weeks valuable. The interrelated nature of HFA and bye weeks result in two additional insights towards a better understanding of HFA. 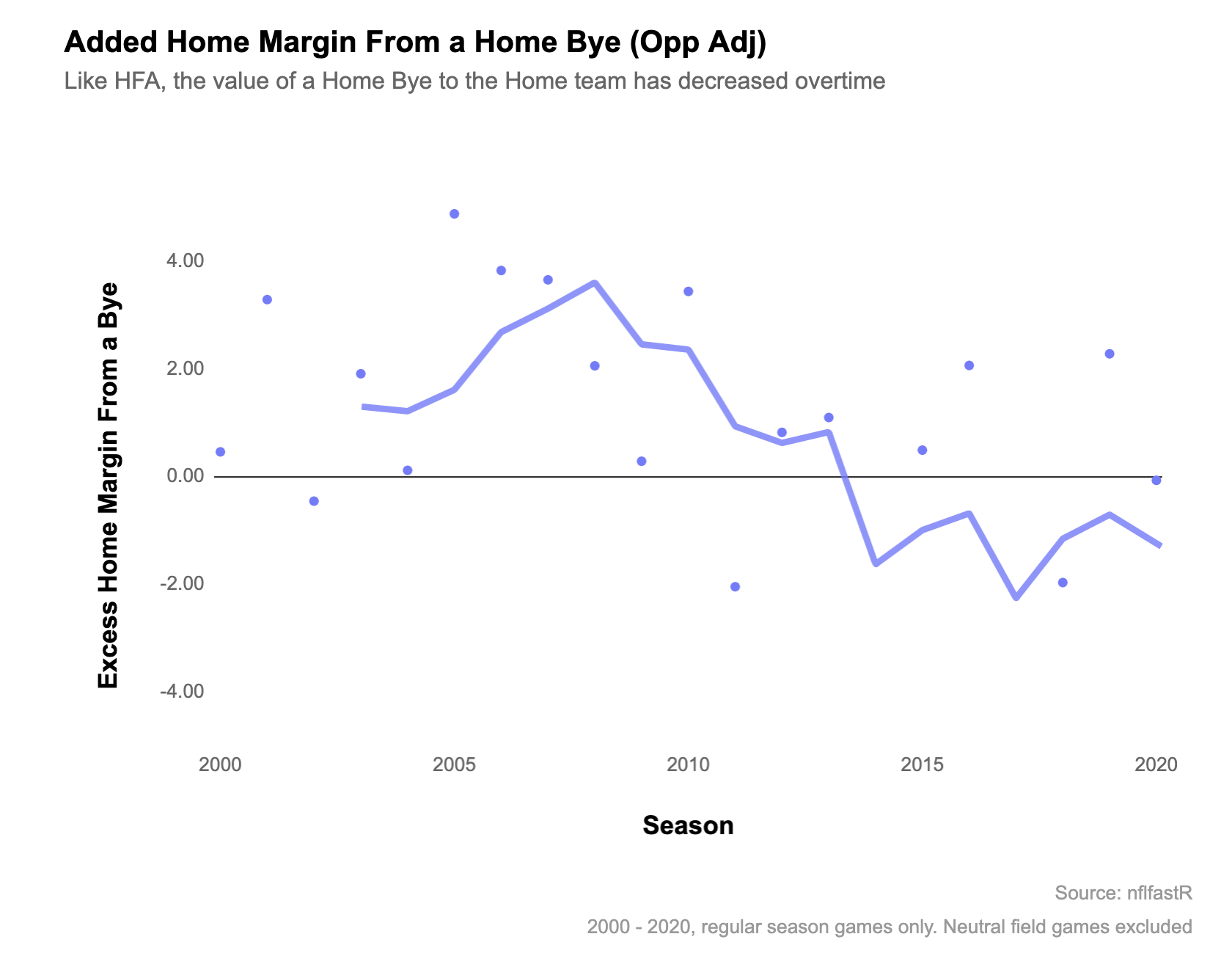 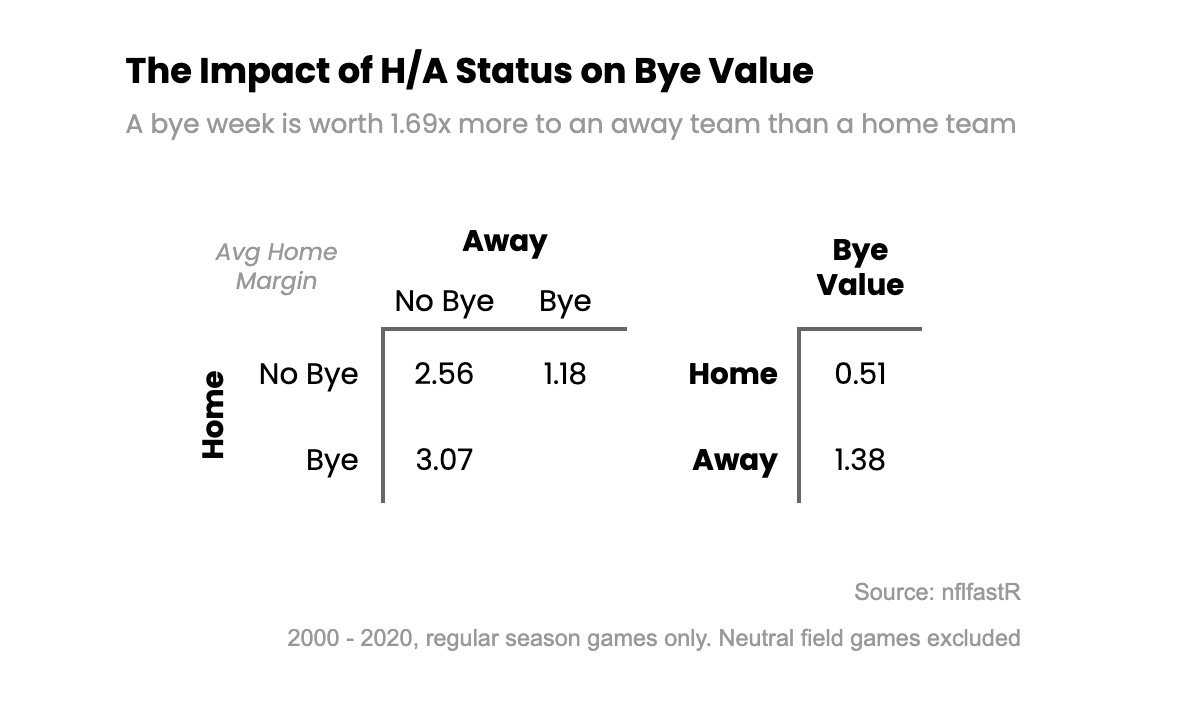 Instead of thinking of HFA and byes as two separate dynamics, they should be thought of as one--an asymmetric rest and preparation advantage for one team over another. A portion of HFA is simply an inherent “mini bye” the home team receives from not losing a day (or increasingly a morning) to travel.

A well known dynamic (in betting circles at least) is the role start times play in team performance. From 1999 to 2020, West Coast teams traveling East performed 2 points worse on average in 1pm EST games than they did in 4pm EST and Primetime games. This dynamic is thought to be caused by our circadian rhythm, which regulates many aspects of physical performance. Studies have shown that athletic performance actually peaks in the early evenings, so when a West Coast team plays a 1pm EST game, they are relatively less primed to compete.

Average home margin of victory (adjusted for opponent) follows a predictable pattern based on how much closer kickoff is to the home team’s optimal performance window: 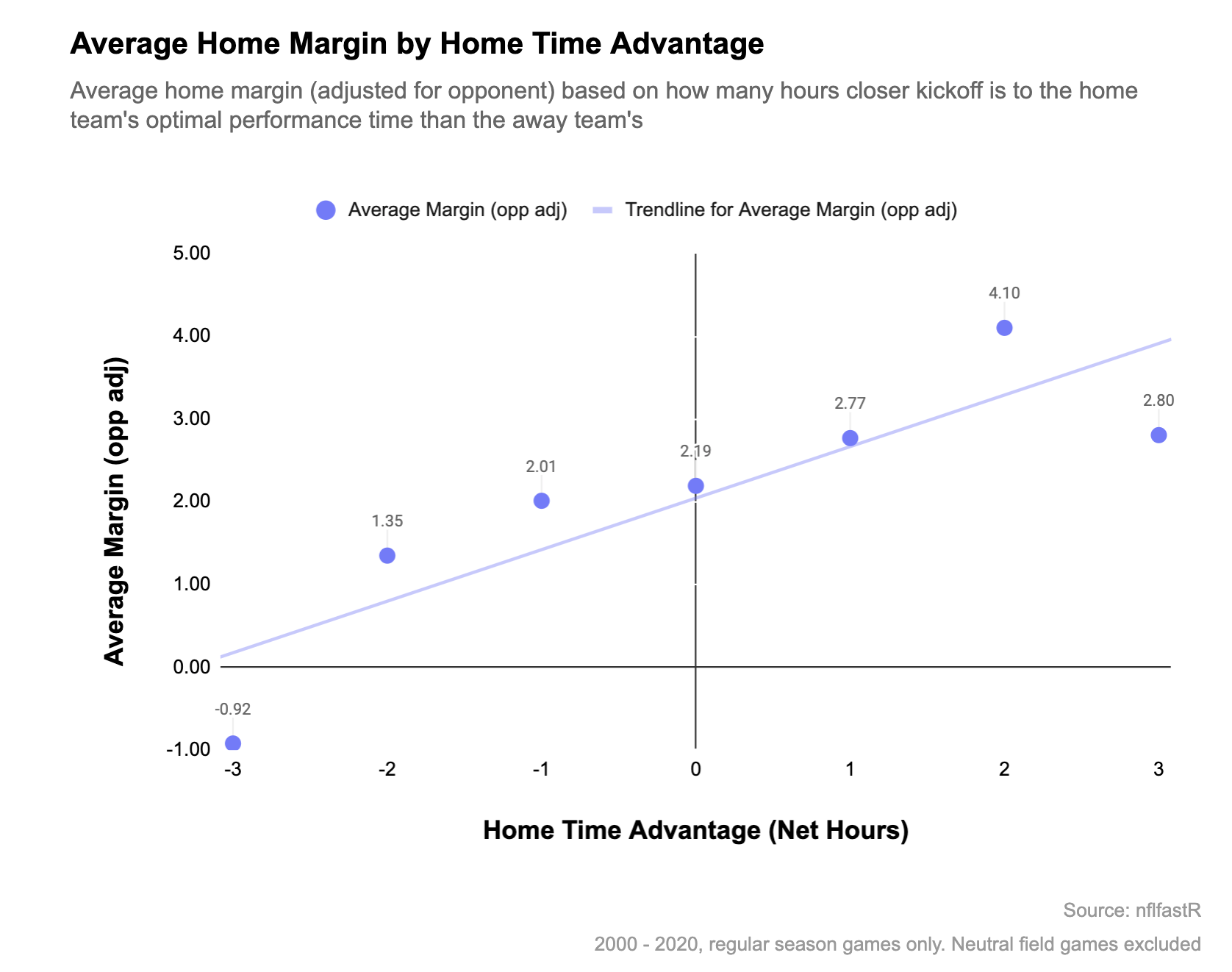 While a vast majority of games do not result in a time advantage for the home team, relative time advantage is still an important dynamic to consider in modeling HFA. This is applicable not just to West Coast teams, but rather any team playing further from an optimal time. East Coast teams hosting a West Coast team in a late window primetime game are actually at a slight disadvantage.

One of the challenges to modeling the above dynamics in the context of HFA is the potential for multicollinearity across variables. Said another way, it’s possible that divisional games see less HFA because divisional games are more likely to feature teams playing in the same time zone or on the same surface. Fortunately, there’s very little correlation between these factors: 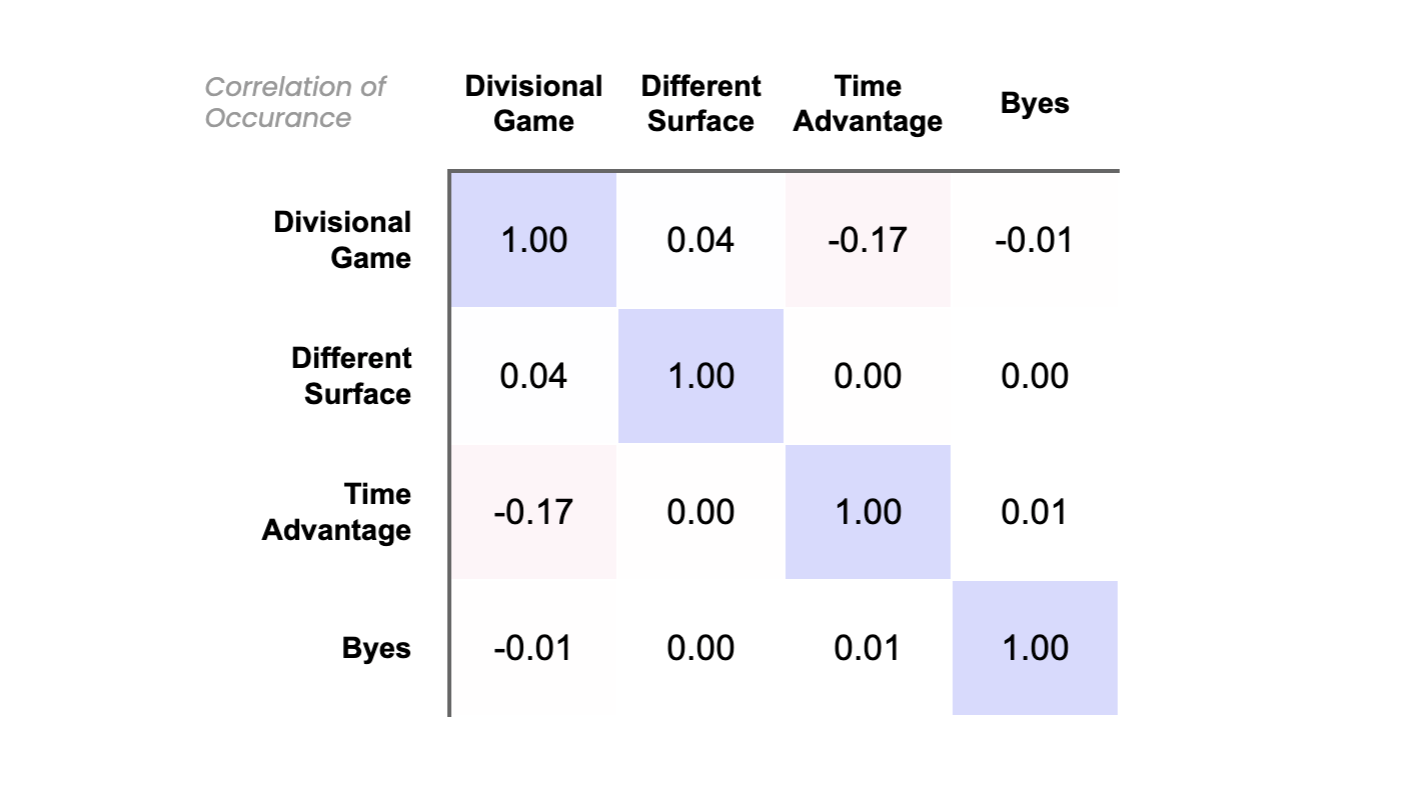 The second consideration in incorporating additional factors in an HFA model is the systemic decline in HFA itself. Given the interrelated nature of HFA and the factors outlined above, the relative effects of these factors shouldn’t be expressed in absolute terms (ie “home byes are worth 0.5 points”). Rather, these factors should be expressed in percentage terms (ie “home byes are worth +25%”). By expressing factors as multipliers to HFA, the systemic decline of HFA can be preserved.

The new model will take a backwards looking rolling average for HFA as a “base” and then apply percentage adjustments for meta factors:

With the optimal adjustments for each meta factor being those that minimize the error (RMSE) in predicting the actual MoV:

The model’s performance will be compared to two simplified HFA models, one that applies a flat 2.5 points of HFA to eMoV and one that applies the rolling HFA base without any further adjustments.

Because HFA itself is highly volatile and 20 seasons of football represents a relatively small sample size, it’s unlikely that a model trained once on some subset of the data will yield exactly correct weights. At the same time, taking the average result of multiple iterations of the model trained against randomly selected subsets, is effectively no different than training the model on 100% of the dataset, which introduces the risk of overfitting.

To solve both of these problems, 20k models will be created against randomly selected training and test sets, creating distributions for both the optimal weights in training sets and their performance in test sets. By training 20k models, we will identify optimal weights as if they had been trained against 100% of the data. And by capturing a distribution of model performance against 20k test sets, we will see the potential of these weights to create overfitting. Said another way, weight distributions should be safely significant (i.e. they don’t straddle 0) and test results should rarely exhibit negative overfit performance. 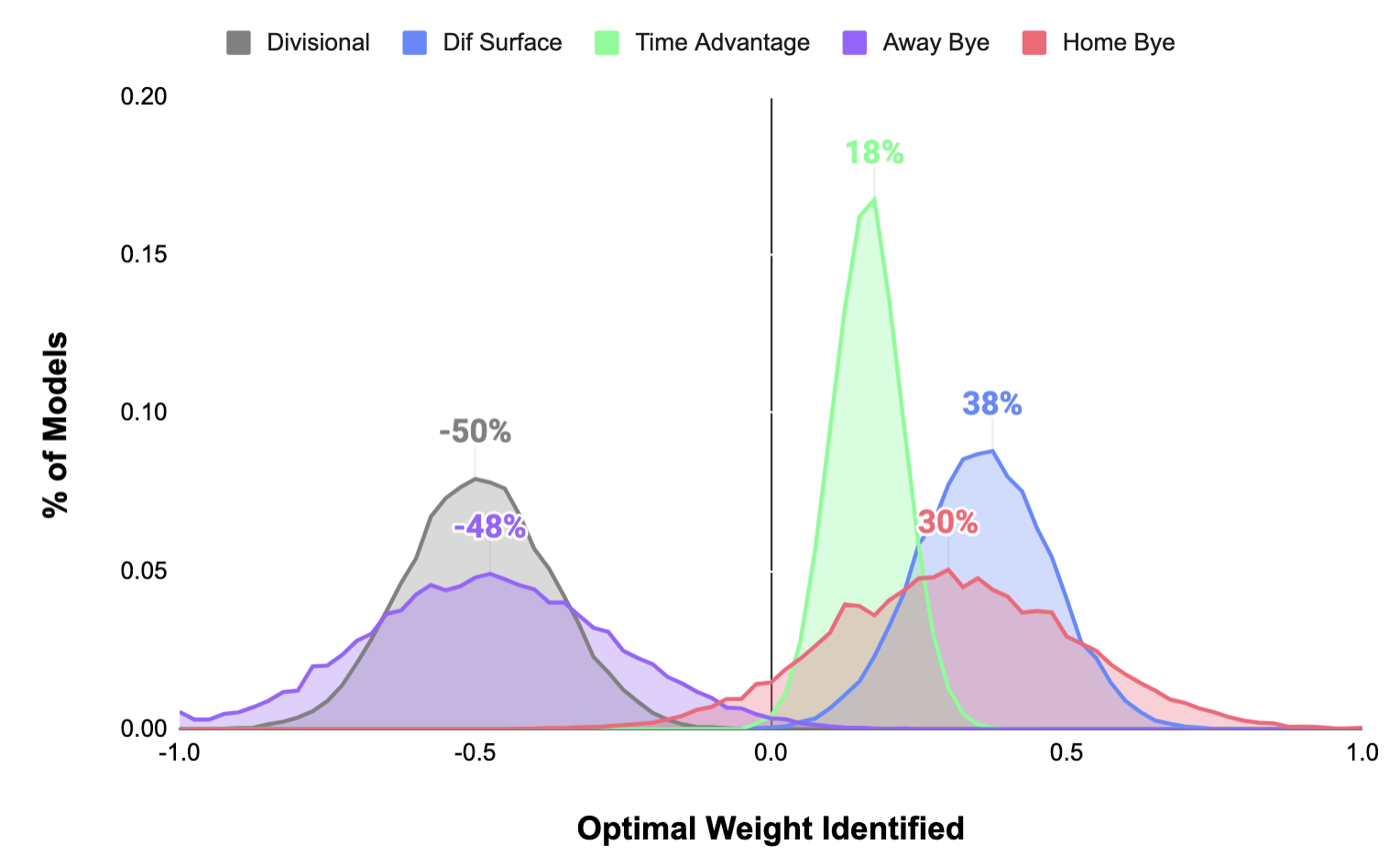 In terms of performance, this approach yielded the following performance lift distributions against a flat 2.5 of HFA: 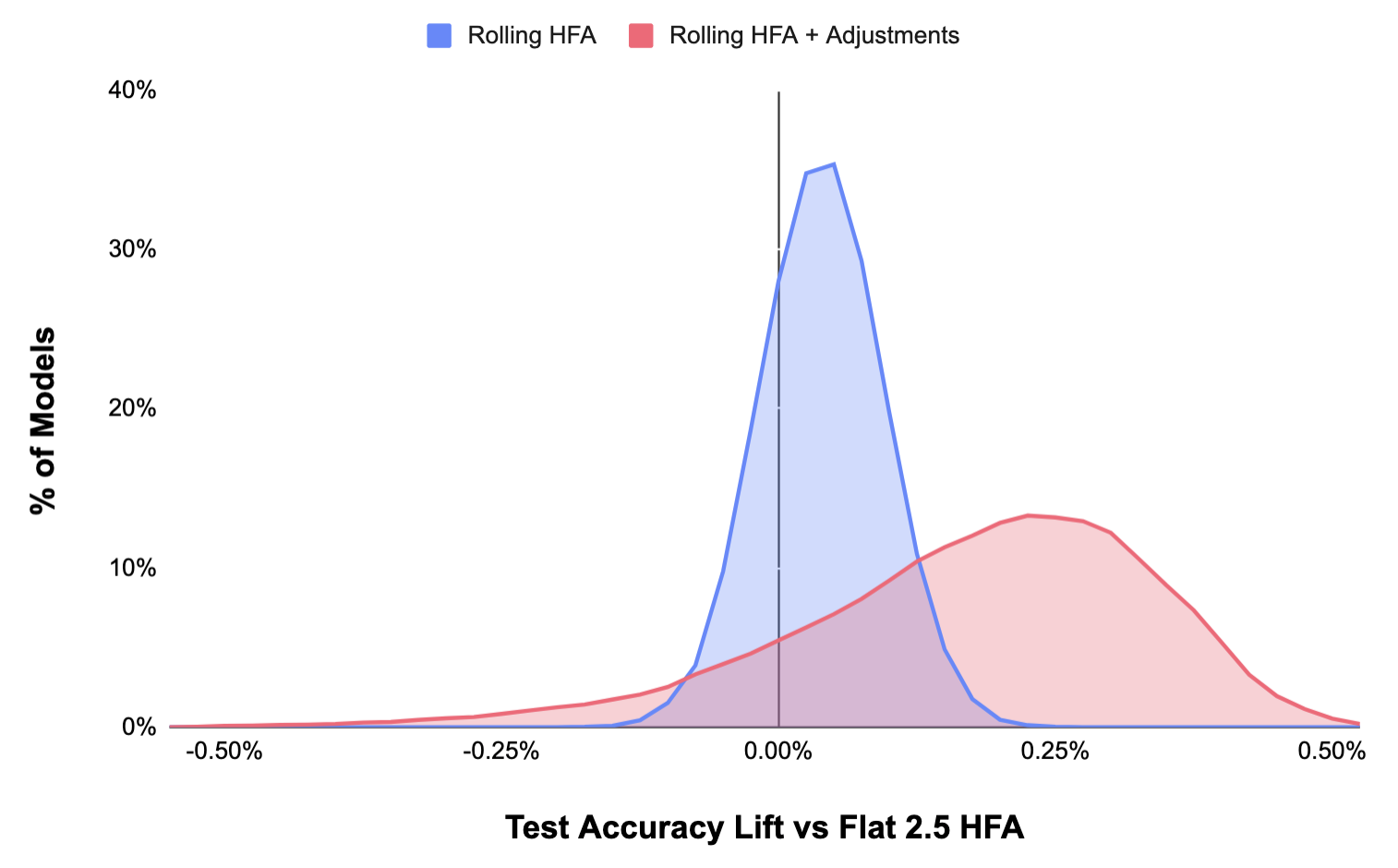 Controlling for the systemic decline in HFA with a rolling value for HFA (blue) results in a fairly small increase to accuracy versus a model that assumes a constant 2.5 points of HFA. When weights for additional context are added (red), the accuracy lift becomes more dramatic, and this improvement exists (i.e. it’s positive) in a majority of test sets. There is unavoidable overfitting risk, but it appears acceptable.

As an aside, it’s worth noting the overall the low magnitude of the performance lift. Even the most accurate predictor of NFL MoV--Vegas’ closing line--is still off by an average of 13.35 points per game, so improving our measure of HFA, which itself represents at most 2.5 points towards MoV, is unlikely to create a step change in accuracy. Rather, improving HFA creates a small, but significant edge, which can still help us better predict NFL games.

Home Field Advantage is a perplexing topic. Despite countless studies across numerous sports, we still don’t understand all the drivers of HFA. We just know that it exists. This article peeled back a few additional layers of the proverbial onion, finding three additional factors that influence HFA significantly. While the overall effects of HFA are fairly small in the scheme of MoV variability, the updated model does represent an improvement and will be incorporated into nfelo next season. As nfelo is a continuous work in progress, there will be, undoubtedly, many more attempts made to better understand HFA before we reach the final version.