NFL Passer Rating and QBR (also known as Total Quarterback Rating) are rating systems used to evaluate the performance of NFL quarterbacks. While they both measure overall quarterback performance, there are notable differences between the two in terms of how they incorporate context, and, more importantly, how they attribute credit to quarterbacks for the team's overall production.

What is Passer Rating

Passer rating (also known as QB rating or traditional passer rating) was developed in 1971 by a commission of league executives, coaches, and statisticians led by Don Smith. At the time, the NFL didn't have a standardized way to measure a QB's performance, and thus needed a system that accurately measured the totality of QB play beyond simple volume stats like total yardage or touchdowns.

At its core, passer rating is an efficiency metric, meaning it doesn't just count total output. Instead, it considers quarterback play in the context of how many passes a quarterback attempted.

Passer rating is comprised of four components: completions, yards, touchdowns, and interceptions. Each component is divided by attempts to measure efficiency and is multiplied by a coefficient to help weight the component within the overall formula:

When passer ratings were first implemented, 66.7 was, roughly, the league average. However, as NFL passing games have evolved and quarterbacks have become more efficient, this number has risen. In 2021, the NFL had an average passer rating of 88.6, a full 22 points higher than was originally intended: 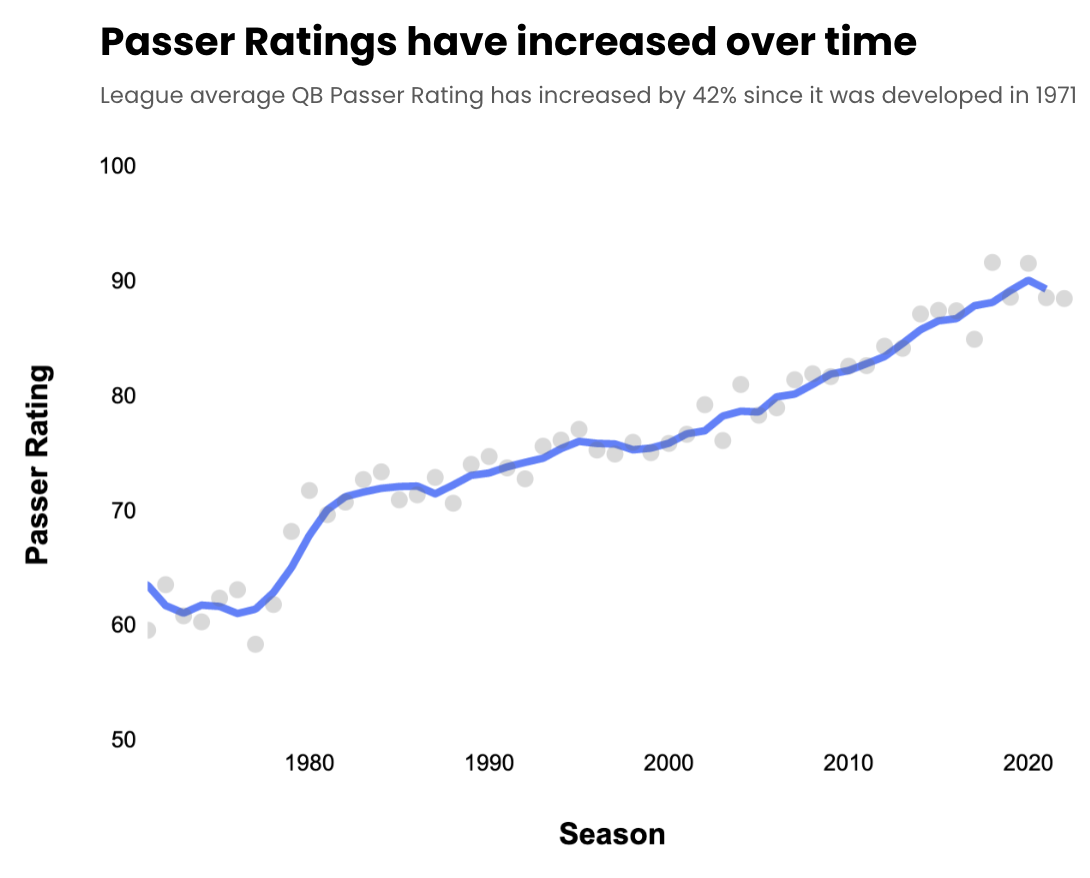 While passer rating has been one of the most commonly used passing statistics since its introduction a half century ago, many now believe it to be limited, or, at the very least, in need of an update.

The most glaring limitation of passer rating is its simplicity in only considering four variables. While yards per attempt, completion percentage, touchdown rate, and interception rate are important, they don't encompass other important elements of a quarterback's performance like rushing yards or yards lost to sacks.

Additionally, since the formula has never been updated, its design is pegged to our understanding of the position in 1971. Quarterback's aren't just better today, they also play differently. Over 80% of the improvement in league wide passer rating can be attributed to higher completion percentages and lower interception rates: 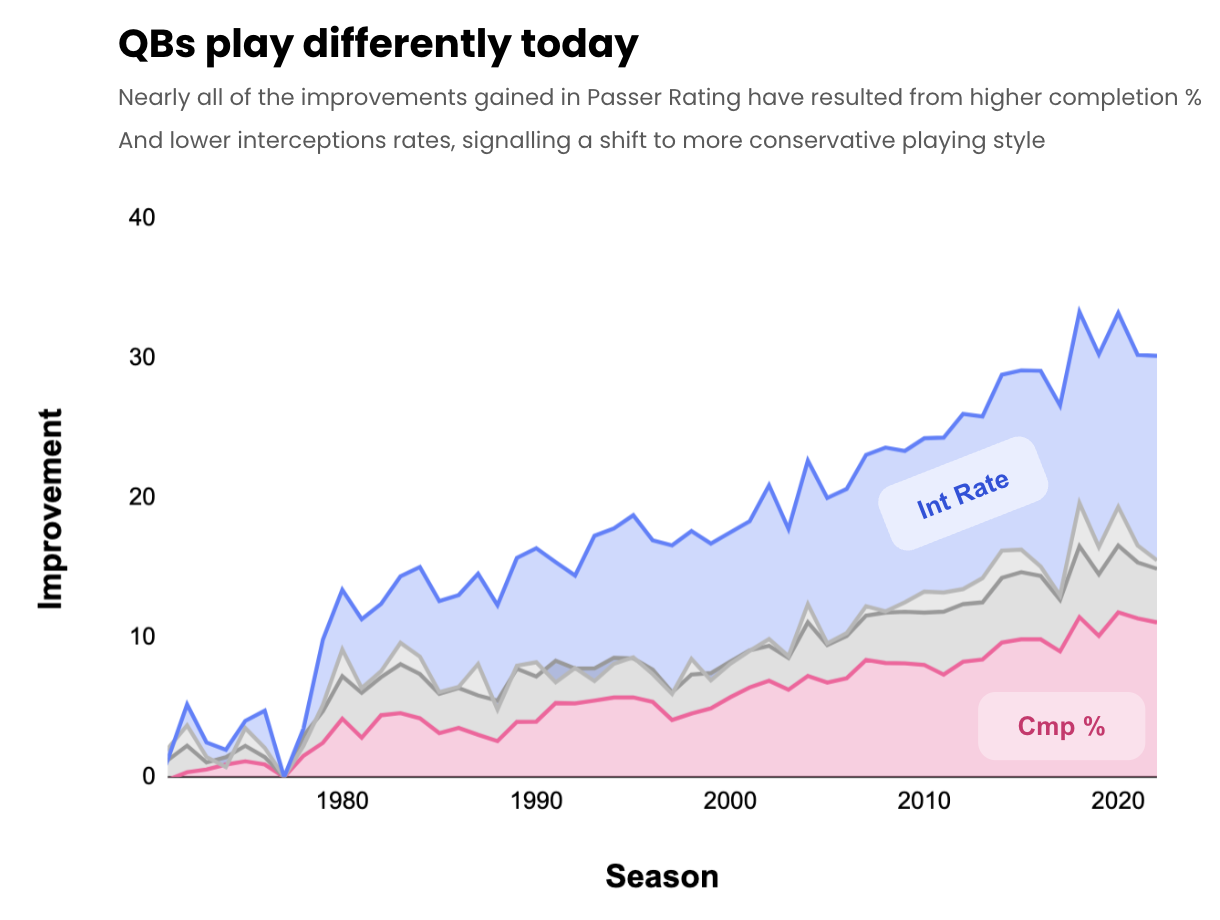 Quarterbacks today are more conservative as the league has figured out that this style of play is more likely to result in wins.

Finally, passer rating has no way to measure context or credit since it only considers raw numbers and doesn't consider other factors like play calling, field position, facing a stronger defense, etc. A quarterback who relies on screen passes or pads stats in garbage time can still achieve a high rating despite not actually being a difference maker for their team.

QBR as a solution to Passer Rating's Limitations

Total Quarterback Rating, also known as QBR, is a rating system developed by ESPN in 2011 to directly address the limitations of passer rating outlined above. As a metric, QBR has two goals that differentiate it from passer rating.

First, QBR attempts to separate a quarterback's performance from the performance of their team by taking things like depth of target and receiver yards after catch into consideration. Second, QBR attempts to tie itself to winning rather than pure volume or raw efficiency by considering game context and up-weighting critical plays.

Since QBR is proprietary to ESPN, the exact formula isn't publicly known. However, the formula can be described based on how it's meant to work in theory. At its core, QBR works by assigning individual values to each play based on a variety of contextual factors such as down and distance, score differential, starting field position, etc. This part of the formula can generally be thought of as something akin to Expected Points Added (EPA). Plays that increase the likelihood that a team scores receive positive point value, while plays that reduce the likelihood that a team scores receive negative point value.

QBR also takes things a step further. While raw expected points added assigns all credit to the quarterback, QBR does not. QBR discounts the credit assigned to the quarterback depending on how incremental the player actually was. For instance, QBR assigns relatively less credit for the play's outcome on screen passes where the receiver does most of the work, and assigns relatively more credit on plays where the quarterback was facing pressure or made a great throw downfield.

In addition to better credit assignment, QBR also adjusts expected points added for win probability to account for the "stat padding" dynamic exhibited by passer rating. With QBR, a play's expected points added is adjusted further depending on when it occurred. Plays that occur in garbage time receive relatively less credit than those that occur when the game is tight and defenses are not playing overly conservatively.

As mentioned earlier, QBR attempts to tie performance to winning. To do this, QBR takes a quarterback's adjusted EPA and translates it to a 0-100 scale with 50 representing average. A quarterback that achieves a 60 QBR would be expected to win 60% of their games. After translation, the resulting metric is called "Raw QBR." To get to a final QBR, an opponent adjustment is applied to account for a quarterback facing either a stronger or weaker defense than average.

Clearly, QBR is a substantially more sophisticated metric, but what do we get for all this added complexity?

At the end of the day, Passer Rating and QBR are just two statistics for measuring quarterback performance. On the surface you might expect QBR to be better. It corrects for game context, can boost credit for quality play in a close game, and can separate credit amongst contributing players.

In practice, it turns out passer rating and QBR are fairly similar and correlate highly with one another. Plotting passer rating against QBR yields an RSQ of 0.524, which is made even higher if you account for the non-linear nature of QBR. Said another way, a majority of the statistical value of QBR is shared with and captured by passer rating: 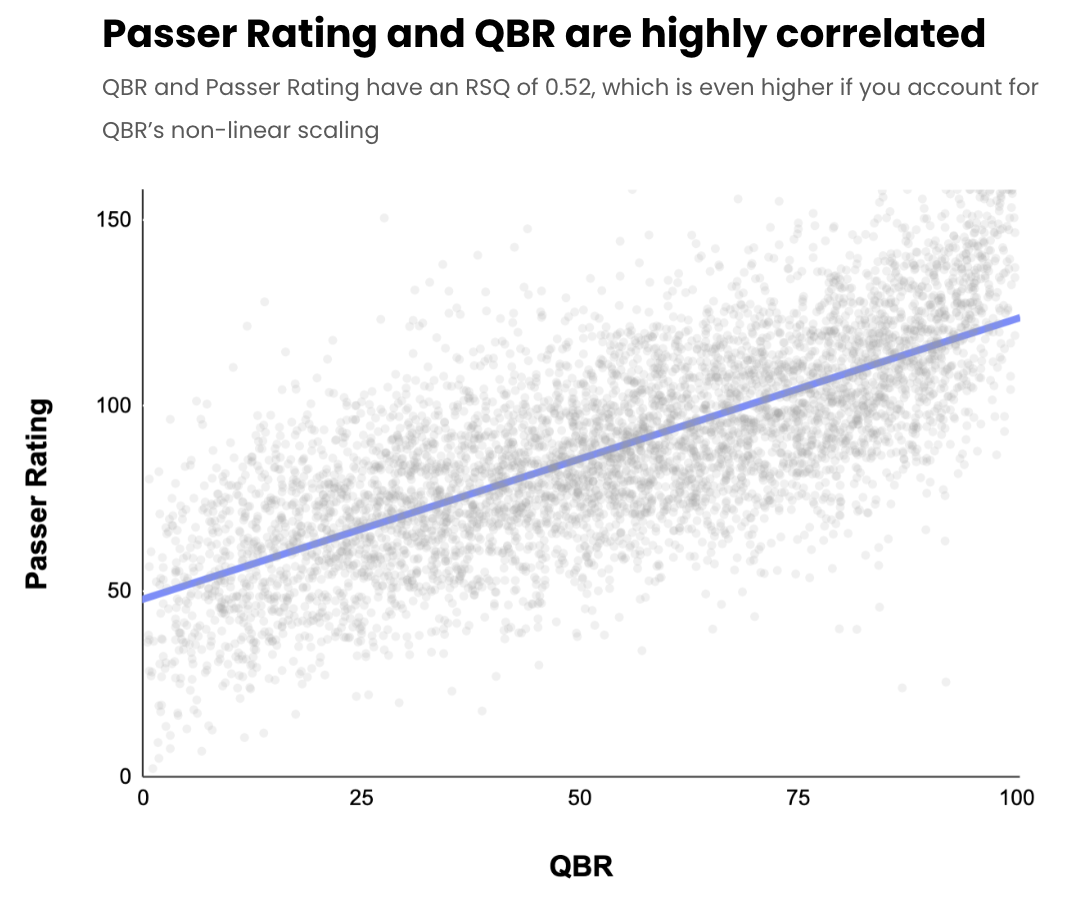 And it's not just that QBR and passer rating are similar. Passer rating might actually be just as good. A good QB rating system should:

Game passer rating and game QBR correlate with game results and predict themselves about equally as well, but interestingly enough, passer rating does a slightly better job predicting future margin of victory:

In total, these three measures tell us that passer rating measures the important aspects of quarterback performance, and does so in a way that is predictive of future performance -- that's pretty impressive!

QBR is meant to measure win probability, but it actually correlates less with a team's margin of victory (MoV) than Passer Rating does. Not only does QBR not do a substantially better job correlating with win's and losses, it does a worse job predicting margin of victory in future seasons.

So where does that leave us? QBR is more sophisticated in the way that it attempts to measure quarterback performance, and there is value in that, but it's hard to overlook the correlation between QBR and passer rating, or how well passer rating holds up from a predictive perspective.

When you consider the proprietary nature of QBR, and the additional value that comes from a simple formula anyone can calculate, there's something to be said for passer rating's place amongst passing statistics, even after all these years.