Using Market Regression to Improve Prediction Accuracy in the NFL

When a market prices an asset below its worth, buyers who know it is mispriced are incentivized to purchase it from sellers who do not. If enough buyers believe an asset is mispriced, sellers may adjust the price higher, either as a response to this market signal or due to classic supply/demand dynamics.

As the price of the asset increases, fewer buyers will believe it to be underpriced and more sellers will believe it to be overpriced. As these forces converge, the asset’s price will stabilize at a point that represents the collective beliefs (ie wisdom) of all market participants. As many well informed and properly incentivized participants place bets on the asset, the market price of the asset will begin to reflect its true worth.

This powerful process is called price discovery and it is the fundamental mechanism through which markets create remarkably accurate predictions of the future.

Models represent another avenue through which the true price of an asset can be determined. Assets have characteristics and historical signals that can be used to project future behavior. A discounted cash flow, for instance, uses a businesses’ existing cash flow characteristics and assumptions about how those cash flows will change in the future to price the business based on the present value of all future profits.

In a sense, models exist in a vacuum from the market. Instead of relying on the collective wisdom of others, models produce an independent assessment of an asset’s value. Though individually models exist in a vacuum, they are the force that collectively produce the market signal. Markets reflect the beliefs of many independent models all assessing the value of an asset in slightly different ways.

However, market regression presents its own challenges that themselves must be modeled. How much should a model regress to the market? Should a model always regress by the same amount?

The best weights to use in this process are those that minimize the prediction error of the regressed model. In this analysis, prediction error is measured by a Brier score where higher values represent more accurate predictions: 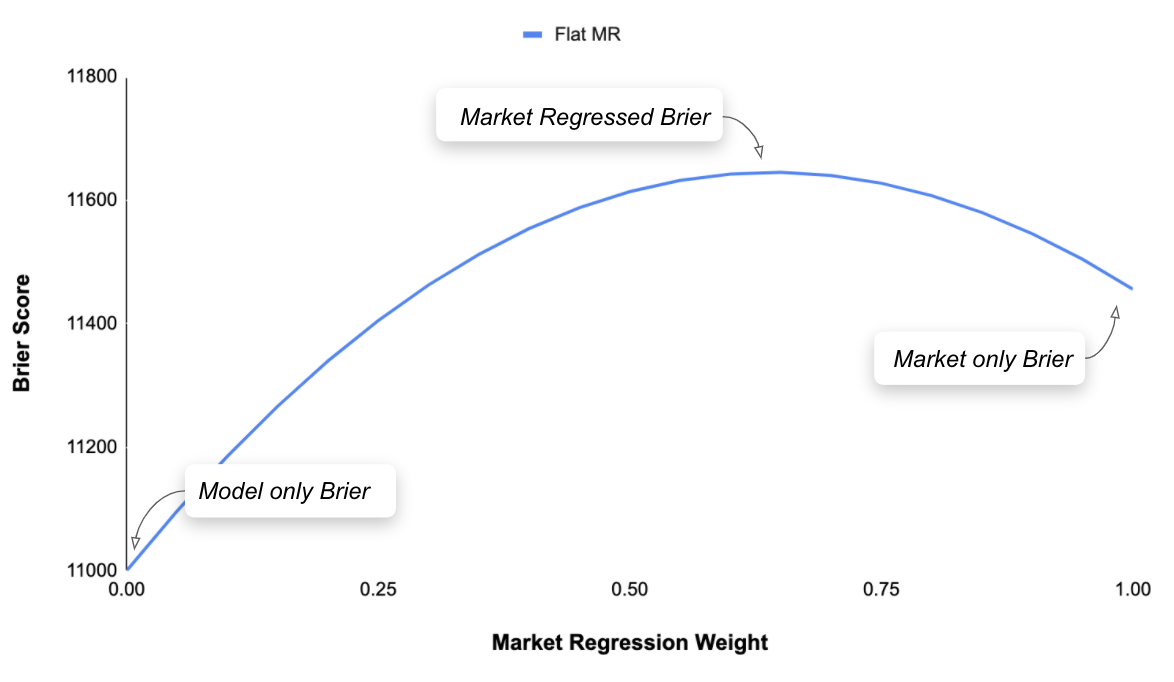 The fact that a regressed model is more accurate than the market means that the model itself contains a valuable signal not fully captured by the market. A model that achieves its greatest accuracy when the market’s price is weighted 100% contains no signal. Generally speaking, the more accurate a model is relative to the market, the less it should be regressed.

If past accuracy is predictive of future accuracy, then the amount the model should be regressed for a given game should scale based on the past accuracy of the model relative to the market. Said another way, if the model’s trailing average error for a team over a given window is lower than that of the market’s for that team, the model’s prediction for the team’s next game should be regressed less.

With a team’s error defined as the exponential average of squared errors over its last N games:

The relative accuracy of the model can be translated into a scaling factor for the regression weight by dividing by an additional parameter and constraining the result to a number between 0 and 1:

The additional parameters of “N games” and “Base” can be optimized to reduce the error of the error weighted regressed line. This method does yield additional improvements over a flat value for market regression: 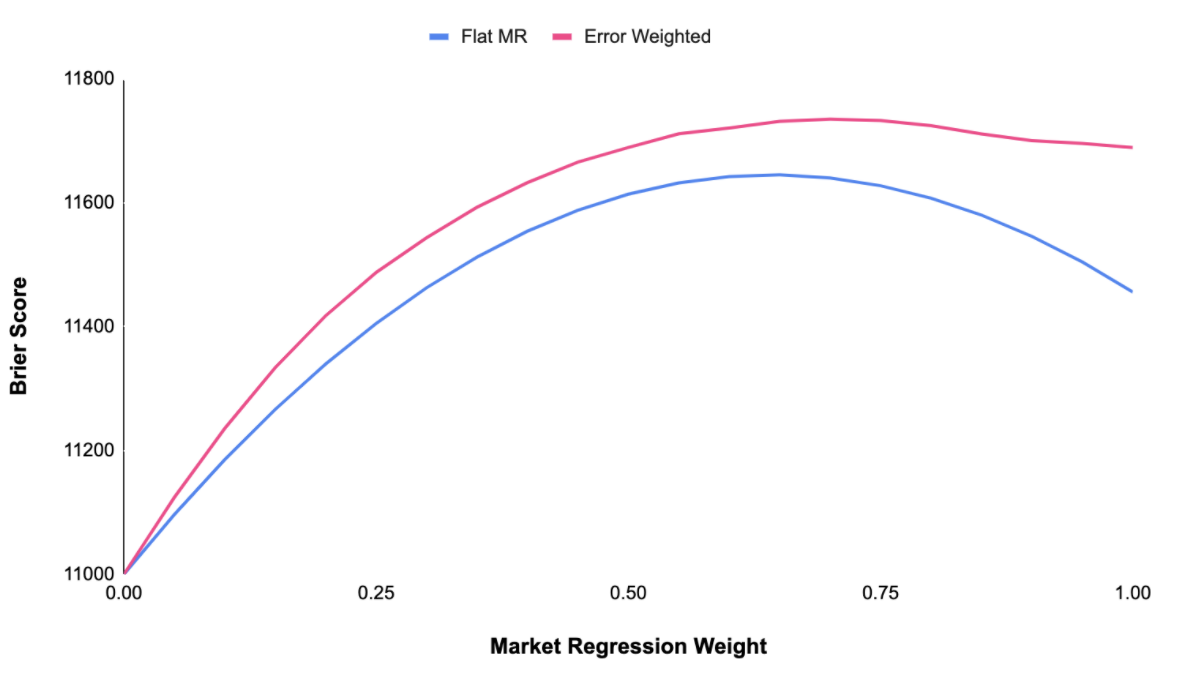 The error weighted market regressed line yields a very powerful model that beats the market line by itself: 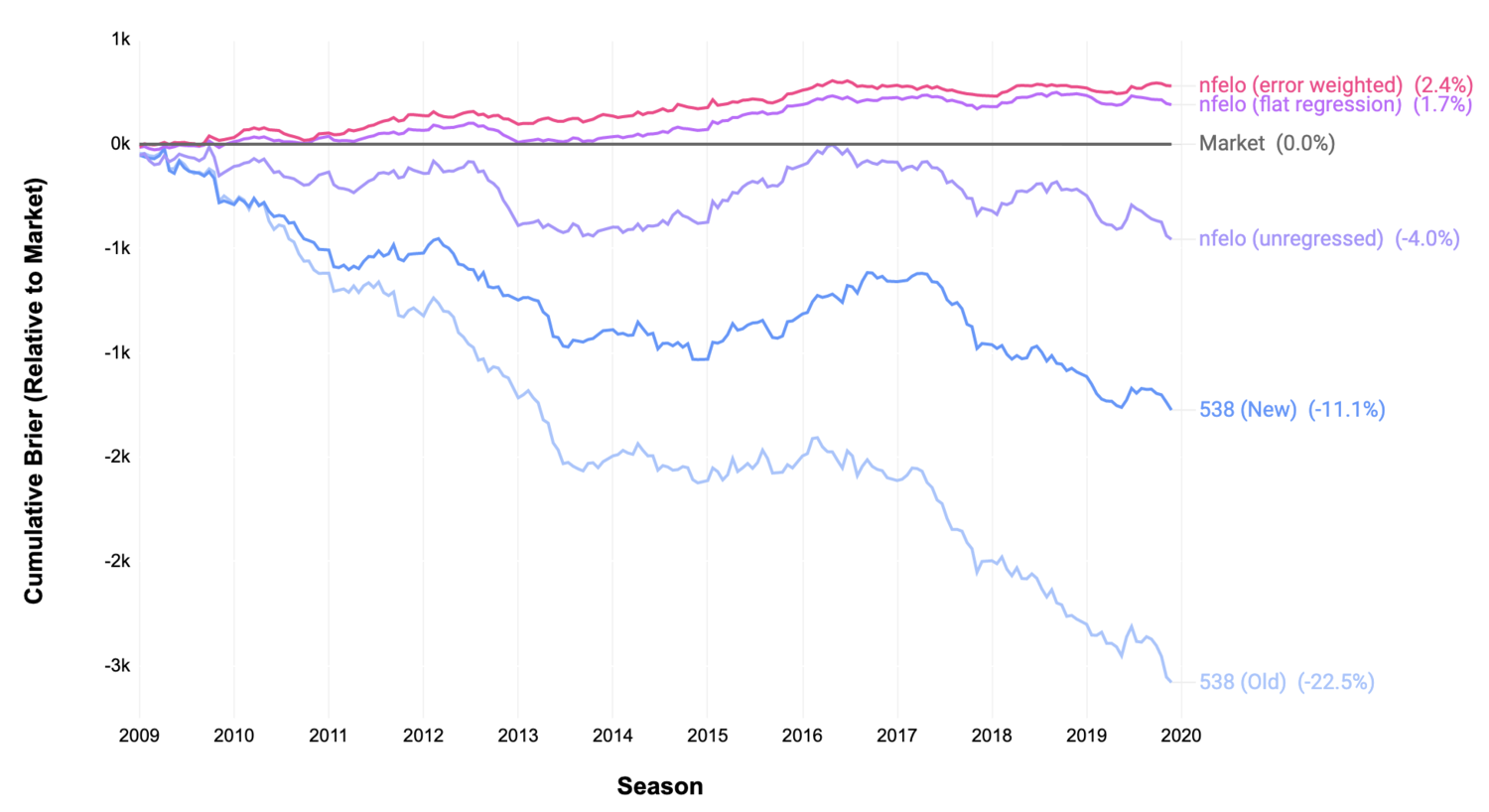 An important point to note here is that Brier scores incorporate the prediction’s margin of error. When the prediction misses the actual margin by a greater degree, the error is larger. Conversely, performance against the spread (ATS) is a binary measure--a model was either more accurate than the market or it wasn’t. As a result, a model with a Brier score below the market can still have a positive grade against the spread if its predicted margins have more volatility than the market’s. This is the case for both the 538 model and nfelo.

Nfelo is a powerful model in its own right. It surpasses a very strong benchmark model (538) and only slightly underperforms the market in predicting margin. This performance alone yields positive ATS performance on higher confidence wagers.

However, as we might expect, the model is made even more accurate when regressed to the market. Because nfelo possess predictive power, the regressed model outperforms the market on a squared error basis (Brier).