What are Game Grades?

By measuring performance through individual components,  game grades often allow for performance attribution as well. Perhaps the best example of this is EPA, which allocates a fraction of every point scored to individual plays.

Given that game grades are an attempt to measure  performance in a more meaningful way, it is important to assess the effectiveness of the game grades themselves.

What Makes a Good Game Grade?

This analysis will consider 4 Game Grades:

Point differential is a net score that is shared by each team. If a team wins by 10, their opponent definitionally lost by 10. While all game grades are “net” scores  in the sense that they measure a team’s offensive and defensive performance, the grades are not necessarily shared by each team. It’s not uncommon for both teams to have positive (or negative) game grades. To derive a single “margin” grade shared by each team, game grades would have to be netted against each other such that the higher graded team always had a positive delta, and the lower graded team always had a perfectly inverse negative delta.

For instance, WEPA graded both the Rams and the Chiefs as winners in their 2018 Monday Night Football classic:

To identify potential benefits and costs to using netted or non-netted grades, both approaches will be used. To keep the sample sizes identical, only home team grades will be used for non-net analysis.

The OoS RSQ is measured across three rolling windows--1 game, 4 games, and 8 games. The windows are equally sized and constrained to a single season. For instance, a team’s 4th game has 4 preceding same-season games that are used to make a prediction about the team’s next 4 same season games (games 5, 6, 7, and 8). Because each team only plays 16 games a season, only 1 data point exists for the 8 game window. This window is analogous to a “First Half v Second Half” analysis:

As individual game grades, non net WEPA and non net DVOA appear to offer the best performance. They both possess strong descriptive value, are measurably better at predicting future performance, and allow for attribution at the individual play level.

Though PFF grades do not perform as well as their quantitative play-by-play counterparts, there can be value in a less predictive measurement if that measurement encodes fundamentally different information. Depending on covariance profiles, combining two metrics can result in a new metric that possess a better performance profile than either metric individually.

A blended metric that combines Point Margin, WEPA, and PFF (all standardized for scale) is more predictive than either of the metrics individually:

Elo uses differences in Elo rating (and various macro factors like home field advantage) to predict win probability. Elo then compares this expectation against the actual game outcome to determine whether or not a team’s rating should be adjusted up or down. For instance, if a team was expected to lose, but instead won, its rating would be increased and its opponent’s rating decreased. 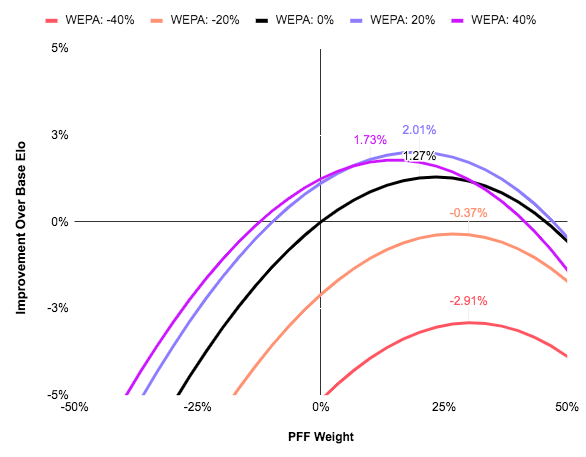 Blending alternative game grades into a basic Elo model that only uses final scores and off-season regression, improves the model’s score (as measured by Brier) much in the same way it improves the RSQ of OoS point differential. Additionally, the model is made even more accurate by blending multiple game grades together. In this case, a game grade that is 60% point differential, 20% WEPA, and 20% PFF works best.

This approach also works in more advanced versions of Elo like nfelo, which factors in QB adjustments, Vegas lines, and smarter pre-season adjustments:

Again, a blended metric that includes both Point Differential, WEPA, and PFF works best. However, in this case, a lower PFF weight is warranted, perhaps because nfelo and 538’s Elo encode similar information already by adjusting for individual QB play.

The superior predictive power of game grades proves that randomness can be corrected for.  This finding doesn’t seem surprising given the broad adoption of advanced game grades like DVOA. Even those skeptical of analytics recognize the pitfalls of relying on point differential alone.

What is surprising, perhaps, is the superior performance of newer alternative game grades like success rate and WEPA. The most descriptive, predictive, and attributable measure of a team’s performance is not a paywalled black box model. Rather, it is an open source model built on an open source dataset. While advanced metrics like DVOA made football audiences fundamentally smarter, we now have the ability to build superior alternatives.

Adoption of open source alternatives will take time, but given the community and resources built around tools like nflscrapeR, this adoption seems inevitable.

*The “D” in DVOA stands for Defense-Adjusted, meaning its game grades adjust over time based on a continuously updated notion of the opponent’s quality. Due to this feature, DVOA’s individual game grades use future information and should be valued for their descriptive rather than predictive ability. DVOA as a point-in-time metric (i.e. without future information) is only published as an aggregate  team metric.

In theory, the predictive power of point-in-time DVOA game grades and team grades should be similar. As expected, a team’s point-in-time DVOA through 8 games, which includes no future information, is less predictive than it’s average DVOA game grade through the first 8 games (0.263 vs 0.278). However, the discrepancy is not large, suggesting that the defensive adjustments are not the most important element of DVOA.

** WEPA is optimized around its ability for the net grade to predict the last 8 games of the season. As a result, the relative predictiveness of the net 8 game window is likely higher than it would had WEPA been optimized for a different objective function.